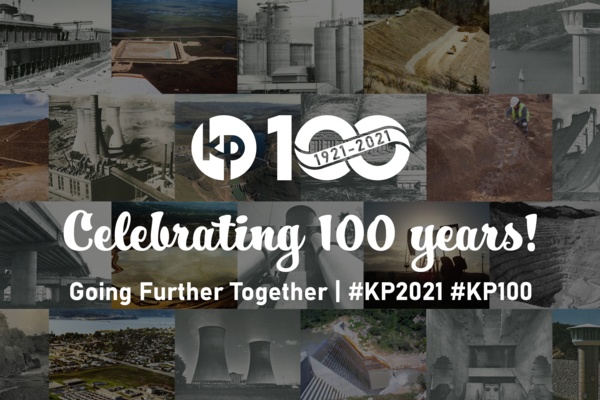 January 4, 2020 – Knight Piésold is kicking off an exciting year of celebrations to mark the company’s centennial anniversary.

Knight Piésold began operations on April 1, 1921 when founder Dr. F. E. Kanthack started a private practice as a consulting engineer in Johannesburg, South Africa. A pioneering water engineer, he explored rivers in Northern Rhodesia (now Zambia) during the 1920s to assess their hydroelectric potential for lead-zinc and copper mines. He, and later the company F. E. Kanthack and Partners, consulted for early clients, such as the South African Railways and Harbours, the Victoria Falls and Transvaal Power Company, the Anglo-American Corporation, and the Electric Supply Commission.

Over the last 100 years, the company has changed names, expanded geographically beyond Southern Africa, and branched out to other industries and service areas. Its mining expertise has been applied to hundreds of surface and underground mining projects in every major mining district in the world and has pioneered and advanced the development of alternative tailings management technologies. The company has also identified and developed renewable energy projects since it started working on its first hydropower project in 1925 and continues to assess the hydroelectric potential of rivers around the world, together with solar, wind, and hybrid clean energy solutions.

With an 850-strong team, Knight Piésold operates from 27 offices in 15 countries and works in five industries to support private and public sector clients.

“Few companies reach such a significant milestone, and none do so without the hard work and dedication of its people,” said Devin Field, Chairman and Chief Financial Officer of the Knight Piésold Group. “Knight Piésold has endured many challenges, but these challenges are what have cultivated the culture and work environment that now propel us to greater heights.”

“With a global workforce, diversified business lines, and a continued focus on collaboration, Knight Piésold has created a solid foundation for delivering the best technical solutions for our clients. We enter our 100th year stronger, better, and more focused than ever on doing what we do best.”

“As we journey onwards, we aim to harness our ingenuity to continually push boundaries in pursuit of technical excellence, innovation, and sustainable development. We look forward to working together and going even further with you.”

Today, Knight Piésold has launched a new website that includes a special 100th anniversary page. Visit this page to view highlights of the company’s historic milestones and check back regularly for more stories that will be shared throughout the year.